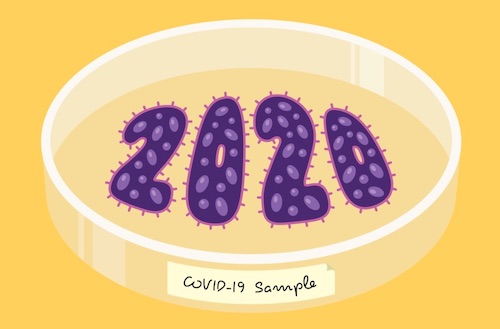 2020 will go down as a horrible, awful, no good year for many of us. Even if you were “lucky” enough not to get sick, or have anyone you love get sick or worse, it was a challenging time to be alive. Covid19 drove a giant flaming dumpster fire into the path of everyone’s 2020 plans. I’d hoped to start back full time working (or at least take on more than the one small client I had), put my littlest into preschool a few days a week and find other childcare for him

Many of us became armchair medical experts this year, reading graphs, charts, and even dipping into medical research articles in an attempt to better understand Covid, the vaccine progress, and all of the other medical swirl around the pandemic. Following actual doctors and medical researchers on Twitter helped me stop catastrophizing, allowed me to sift thru the noise and focus on the things actual experts found important.

In particular, the posts of UCSF’s Dr. Bob Watcher were a consistent source of clear information. When things seemed the most dark last year, I’d read his most recent updates and his level-headed expertise never failed to make me feel better.

2. Doubling Down on Technology

I’ve worked in tech for 20+ years, but 2020 was the year I fully embraced a lot of tech that I’d ignored, resisted or only used sporadically. Especially around shopping for basics. I’ve used Amazon and Target online for occasional hard to find “household” items, but usually trekked out to a physical Target, Costco or neighborhood spot for things like toilet paper, paper towels, diapers and fresh food. Shipt, Good Eggs (referral – save $25), ImperfectFoods (referral – save $10) and Instacart quickly solved the “What will I feed the kids tonight, I can’t think and what is time anyway?” conundrum.

And like so many others, streaming media kept us all a little saner. Netflix and Disney+ helped distract the toddler while the first grader was distance learning at home, silly little iPhone games distracted my stressed-out pandemic brain, and zoom-based art, music and gymnastic classes kept my oldest kiddo connected to his passions while he wasn’t able to do them in person.

And of course, Facetime and the fun House Party app also kept us close to our far-away parents/grandparents who we didn’t get to see all face-to-face all year. House Party in particular kept my six year old interested in talking longer by layering an Uno game or Karaoke round on top of conversation with his grandparents.

It seems a bit weird to list Live Music as a saving grace during this terrible, no good, awful, year for live events. But stick with me here. Since I was old enough to drive, I’ve been driving (or walking or flying) myself to concerts. I’ve probably enjoyed thousand of live shows over the years, but a few bands have stuck around as my all time favorites. As life, work and two little kiddos keep me from going out as often as I’d like, I’ve prioritized a few “must see” bands that I never miss. At the top of that list is the Canadian band the Barenaked Ladies. In another life, I ran a paper fanzine (Nakedhead) for them back in the early 2000s, I used to spend hours online with other fans and I’ve traveled across the US and Canada to see them 64 times live since 1994. I’ve also seen current/former band members in other bands, side projects, and special events over the years, including seeing former BNL singer/guitarist Steven Page‘s solo shows.

Early in covid-times, Steven started holding first one, than weekly zoom concerts in his basement home studio, playing his own solo work and the hits, deep cuts, and eventually the full albums, from his work with the Barenaked Ladies. The weekly 2-3 hour show, held on Saturday afternoon, quickly became a mental health/community connection point for me during lockdown.

This connection grew every week and every song, shared together with the faces inside the little squares, all of us broadcasting from all around the world. I can’t imagine the weirdness of singing to an audience you can’t hear singing along, but Zoom doesn’t allow for easy audience participation and Steven’s early attempt to get us to sing along was a spectacular disaster. For the New Years Eve show, the community came together to bring the “noise” back to the show – pre-recording a “sing along” to one of his songs and creating what was one of the most emotionally powerful moments for me for the entire year.

You can spot me, my husband and my oldest in the video below. There was nary a dry eye in the virtual house after that was over. It was such a cathartic way to celebrate the ending of 2020.

Art is not magic, it’s part of being human